Being the only member of my family who hadn’t seen The Magic Band, it was only a matter of time before I made it along to one of their gigs. When my dad generously offered to take me to Manchester to see them, I jumped at the chance of a Magic Bonding session with my dad. But first off, “who are The Magic Band?”, I hear you shouting impatiently from your armchair. The long answer involves an album that was Rolling Stone’s 58th best album of all time, a mentally- and physically-abusive frontman who kept his musicians in a house in the desert (feeding them only a cup of beans a day) and a legacy that influenced everyone from The Sex Pistols to Kurt Cobain to The Red Hot Chili Peppers to Blondie. The short answer would be, “what I can only describe as an avant-garde, blues, psychedelic rock band”. My dad has been into this band since 1969. The fact he’s been listening to them for 45 years was a strong enough selling point for me. He’s been into my mum for the same amount of time and I like her well enough, so I figured there was a good chance I’d like the Magic Band too. Not wanting to be the only person who didn’t know the music (I already feared I’d be the only person without a beard) I asked my dad what I should be revising before going. “You’ll know it all through osmosis, your brother knew it all when he saw them”. My dad massively overestimates the part of my brain dedicated to memory. Whilst it’s true that he’s played their music throughout the 20-odd years I’ve lived with him, my memory is not great. I think my brain accidentally allocated the remember-this-shit part of my brain to the think-up-all-the-puns part. Surprisingly, he would later be proven correct.

We bumped into a couple of members of the band in the street, since our hotel was close enough to the venue that we could have comfortably forward-rolled there without getting more than a few minor scrapes. However, the night quickly descended into horror. First up, we strolled in like bold yins and said we were on the list. The guy checked and politely said we weren’t. I was like “ahhh but of course, we’ll be under my dad’s alias”, he checked again, looked embarrassed and said no. Helpfully at this point a loud-shirted cockney appeared, to save us from the queue of people glaring at us. He told us the band hadn’t handed in their guestlist and returned minutes later with a post-it with our names on it. The real horror began when I introduced myself and he replied with “ah no, we met, remember?”. I told him we hadn’t and then he said “yeah yeah, you were at the other gig”. Now, knowing that I was with my dad and that at the other gig he was with my mum, I can only conclude that he thought I was my mum. My mum is 60. While she’s ridiculously beautiful and looks nowhere near her age, I still don’t accept that I could possibly look over 22. I’ve taken action and am booked in for my first anti-age facial on Thursday. I’m not joking.

I digress. The gig was at Band on the Wall in Manchester, a venue so-called because back in the day there was literally a band on the wall. 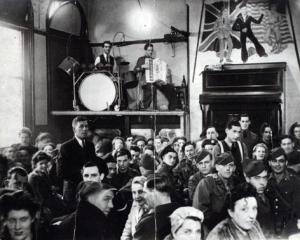 If you look closely, you’ll see it’s actually a photo of Daniel Radcliffe who has travelled back in time to 1943. 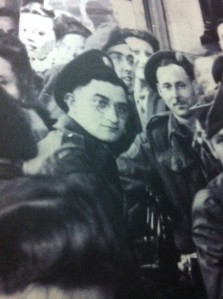 The venue was the perfect size and sold a variety of fine beers on draft – so far, so good. When the band took to the stage, I wriggled right down to the front for the best view possible. From the very start of the show, they were ridiculously good. It was one of those fabled gigs where everyone’s just mesmerised by the band. John French, the singer and sometime-drummer, was bursting with energy, screaming into the microphone and staring down the audience with eyes so wild and intense that he was legally obliged to wear sunglasses to protect the audience [citation needed]. After a 12-song set including Ella Guru and Kandy Korn, they announced they’d be taking a 20 minute break to come and meet everyone and sign memorabilia. In November, I got in touch with them and asked them to wish my dad a happy 60th and the band replied with a video of them singing happy birthday. So during the break, I decided to go and thank them for doing it. I saw Denny Walley, the guitarist, walking around shaking people’s hands. He walked up to me and put his hand out, I told him how much I was enjoying the show and then told him who I was and thanked him for the video. He completely changed and shouted “heyyyy, you’re his daughter! So nice to meet you” and hugged me. I then went to say hi to Mark “Rockette Morton” Boston, the bass player, who my dad assures me spent the entirety of their 1972 gig at Kelvinhall running  up and down the stage with a toaster on his head. Coincidentally, this was the LSD-era. He now reminds me of Prospector Pete from Toy Story, with his southern-gentleman drawl.

After the break, the band  got back down to business – opening with a drum solo from Mr French. After 2 songs, he tagged in new kid, Andy Niven. Following John French is no easy feat but one that Niven excelled at, battering the drums with finesse and accuracy. French, back on the mic, began to gesture along to the lyrics of the songs. His gestures were so literal it made me think of the songs you do actions to at primary school. The combination of wild eyes and gestures made him seem like a dangerous and unpredictable children’s TV presenter.

Normally, the best bands I’ve seen are the ones that I’ve liked for years and know every song they have. The Magic Band, whilst having been background noise in my house for years, were not one of those bands that I knew through and through. However, they absolutely blew me away. At one point I genuinely thought I was going to cry. I’ve cried only twice at gigs before. Once when Paul McCartney started talking about the day he found out John Lennon died and once when Roger Daltrey sang “whoooo are you?” and pointed at me (I not only cried but also almost peed myself and had to hold it in since I was on my brother’s shoulders at the time). I’ve never seen a band that so effortlessly connected with every single person in the room. Songs like Hair Pie and Big Eyed Beans From Venus had people dancing away. Given how wild and disjointed the music is, no two people were dancing the same way, which made it very reminiscent of silent discos where everyone’s listening to different songs.

After the gig, the band again came out to meet everyone. I was standing talking to my dad when Denny sidled up behind me and took a selfie of us. What great post-gig service. The band come and find you to take pictures with you.

Due to wearing an eye-catching shirt, this was a theme that continued for the rest of the night as various band members demanded a photo, presumably to show the folks back in the states how the UK dresses for a Thursday night gig. Here’s the very shirt: 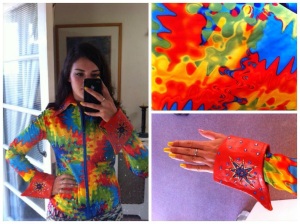 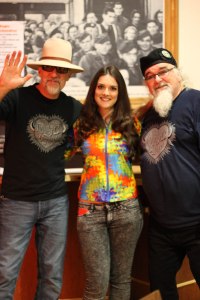 I had been chatting to John French for a bit and he told me how much my dad had helped them PR their gigs and how much he appreciated him. I can’t get my head round the fact that a band my dad’s been listening to over a period of 6 decades (really) now talk about how grateful they are to him. This paid dividends when I decided I’d get a tshirt. I walked up to the merch stand with my dad and the guy gave us it for free and said that the band had told him not to charge my dad for anything. I suggested we take the bass guitar that was also for sale and maybe the table under it but we decided that might be going a bit far.

We stood chatting until we were the last to go and were repeatedly asked to leave by the staff. We headed back to the hotel where, unbeknownst to us, the band were also staying. So, a rock n roll evening of beer and music ended in a slightly tamer morning of granola and orange juice with John French and Eric Klerks.

If you get a chance to see them, do not think twice. If you give them a listen and don’t get it, look to Simpsons’ creator Matt Groening for guidance on Troutmask Replica, their magnus opus:  “I thought it was the worst thing I’d ever heard. I said to myself, they’re not even trying! It was just a sloppy cacophony. Then I listened to it a couple more times, because I couldn’t believe Frank Zappa could do this to me – and because a double album cost a lot of money. About the third time, I realised they were doing it on purpose; they meant it to sound exactly this way. About the sixth or seventh time, it clicked in, and I thought it was the greatest album I’d ever heard”.

5 responses to “The Magic Band”