I’ve been incredibly sporty recently. Well, I say sporty. I mean watching the World Cup from the comfort of a chair with some 9% beer to make it more fun. The last time I had a team to support in the World Cup I was 9 so it makes a nice change to have someone to cheer on. I live in a neighbourhood with lots of Algerians and they’re going absolutely mental for it. You can tell when a match has finished because everyone goes out into their cars and peeps their horns for an unfathomably long time. Other sports I’ve taken up have been football and frisbee. They’re good fun, you go along to the park and have a picnic while your sporty pals play football and frisbee. Actually, I think I’ve taken up picnicking. Naturally, the most interesting things that happen do not involve the sports themselves. I’ve been entertained by a friend splitting open a recent surgical wound after approximately 17 seconds of football and coming off the pitch looking like he’d been shot. Another interesting incident came when we were leaving the park after a sun-soaked afternoon of sports (my chosen activity being eating boiled sweets and complaining about the amount of coverage of Kim Kardashian’s wedding, whilst trying to find pictures of her wedding dress). A girl walked up to us and starting telling me how beautiful I was. I politely thanked her which led her to start playing with my hair and telling me how magnifique it was. She asked if I had a boyfriend and then asked if she could kiss me anyway. It was at this point I started to wonder if I was either in a clichéd porno or a dog-eared, vintage, French novel. I gave her a very tame smack on the lips, to which she then shut her eyes, leaned in and said “more”. I decided then that it was probably more cliché porno than dog-eared novel, so politely declined her advances. This didn’t stop my friends telling my boyfriend I’d taken to hooking up with girls in parks.

Recently, I decided to go down to the town I lived in last year to visit my old flatmate. Since France’s train service was on strike (again) I opted to car share. In France, it’s really common to use a car sharing website to find someone going your way. The way it works is that you have a profile, you either search for a journey that someone is offering or request the journey you’re looking for. Once you’ve found one that suits, you pay online, the website holds your money and gives you a code. You then give this code to the driver once they’ve turned up and they enter it online to realise the money. Thankfully I was not raped or killed and arrived safely in Tours.

My flatmate insisted on meeting me at the station I was getting dropped off at, despite my protests that I could handle the 15 minute walk myself. An ominous text message stating “the town’s changed since you left” convinced me to let her come. I quickly found out that our quaint French town had become a hotbed of violent attacks. The quiet side street we lived on had now given our neighbours cause to phone the police on multiple occasions after seeing women attacked in the street.

On a cheerier note, the next day was the  fête de la musique. Every year, on the 21st June every village, town and city puts on bands and DJs. It’s totally free and sprawls over the whole city. It ranges from big official-looking stages funded by the council, to a band playing in front of their friends on a patch of grass they’ve claimed. Everywhere you go there will be swing dancers teaching the public their moves, DJs tucked away in  every side street and rock bands spilling out of pubs. Restaurants get involved too, setting up a stall in front of their business and selling food to fuel revellers walking past. There’s also free hats……and that’s an alright day out in itself by my reckoning.

It was a glorious day so we decided to head to the guinguette which is a beautiful outdoors pub tucked in amongst willow trees with fairy lights strung through them. As an added bonus it’s right on the banks of the Loire.

After a couple of drinks, we headed to the bar, where we were met with this sign:

Yes. Your French isn’t as rusty as you think, you have correctly understood. That is most definitely a sign informing thirsty clientele that no alcohol will be served. In a bar. I can only imagine they had their licencing law cut for the  fête de la musique. Other evidence of lack of booze was that for the whole day supermarkets weren’t allowed to sell drink. Hilariously, they hadn’t just put up a sign to advise people, they had covered the multiple alcohol aisles with one huge tarpaulin. After sampling some delights  from the barbecue we headed off in search of more alcoholy pastures. We walked through a huge number of acts but my favourite was a samba band that I’d seen last year too. By the end, they had everyone following them in the street.

An additional bonus was that some pranksters created their very own foam party with the fountain. 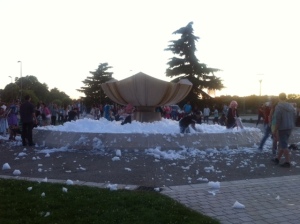 In other music-related news I recently headed back to Glasgow for the (somewhat disappointing) Libertines gig. A combination of terrible sound quality (feedback every time Pete Doherty got near the mic), some self-indulgent interludes and having to stop and start songs made me realise I had seen friends’ bands play down the pub better. And, before I get totally shot down for this, I know it was a warm-up gig. I know they haven’t played together much for years. But really, £30 a ticket and they struggle with some songs? They should be rehearsing enough before that they know their stuff. It speaks volumes to say that I’ve seen Pete Doherty playing at the height of his drug problem and he was better than that. What became of the Likely Lads?

This, however, was not the most traumatising part of my trip. I was flying out of Manchester since it worked out cheaper. My friend had asked me to bring her back a Lush shampoo and, realising that it was more than 100ml, I dutifully decanted it into 4 tiny tupperwares. Going through security, I was told my bag would need to be searched. She took out the shampoo and told me that since it wasn’t marked what size the tupperwares were, she couldn’t let me through with them. I pointed out that owing to their miniscule size I would be surprised if they were more than 50ml, let alone 100ml. I was told there was nothing she could do. I asked to speak to her boss since I didn’t think this was fair. A security guard then came over and told me that not only was this the case but even if the bottle was marked he wouldn’t let me through with it since it was a gel and therefore wasn’t allowed. Since I have taken shampoo on a flight about 345,625 times, I told him I didn’t think this was correct but I was told there was nothing I could do. I was still waiting on my other bag coming through and when it did, I was told it was also going to be searched. It was at this point that things really took a turn for the “oh fuck”.

She pulled out a can of pepper spray and asked her colleague if it was indeed pepper spray. First let me explain why I was carrying pepper spray. It’s illegal in the UK but legal in France. A few months ago there was a big scandal in Lille because a woman was sexually assaulted on the metro. There were other passengers in the carriage and she was screaming for help and not one  person helped her. This and the time a man grabbed me in the street led my boyfriend to buy me pepper spray. So it was in my bag when I left France and I’d completely forgotten it was there. The concerning thing is that I got my flight in Brussels and obviously it was in my bag. However, they didn’t pick up on it. So, in Manchester, when the girl asked her colleague if it was pepper spray, I piped up to tell her it was and began explaining my situation. She asked me for my boarding pass and passport and then left. I was so stressed and didn’t know what was going to happen and I realised I had a “Yes” sticker on my jumper. I laugh now, but the thought genuinely occured to me that they might think I was some sort of pro-independence terrorist. I hastily removed my cute little sticker. When she returned, she simply told me to go to the security desk to pick up my documents. I assumed they had recorded and checked my details to see if I was a mental but when I arrived they asked me to take a seat and told me they’d called the police. Unlike my peers, I’d never even been so much as booked by the police for loitering like a hoodlum, so needless to say I was in a total panic and wondering how I’d integrate with the other inmates at Guantanamo Bay. I definitely wouldn’t be able to go on hunger strike with them. I need snacks as often as a toddler, otherwise I start to become a terrible human being. When the police arrived to question me they were really strict but as soon as I told them that I lived in France and why I had it they completely changed and were actually really nice.

When it was done, I swaggered away loudly singing I Fought the Law and I Won. Jokes, I burst out crying from the stress, phoned my mum and got a large gin.